Tools for facilitation, deliberation and life

When the three directors of MosaicLab sat down during the pandemic to start writing a book about how to “do” deliberative engagement processes like citizens’ juries and community panels, they weren’t to know that the finished product would be as relevant and powerful around the family dinner table as it would be in front of thousands of remit-focused community members.

Many books have been written about deliberation, many of them focused on the philosophies and principles that underpin deliberative democracy. However, this is the first to be written through the lens of facilitators and to walk the reader through every detailed step of the on-ground delivery of deliberative process.

Facilitating Deliberation – A Practical Guide is the work of the three founders of MosaicLab, facilitators with extensive experience in high influence and deliberative engagement.

Kimbra White, Nicole Hunter and Keith Greaves spent almost three years writing the ‘big book’, which is a comprehensive guide to this specialised and powerful form of community engagement.

Spanning seven chapters and 257 pages, the book captures the authors’ insider secrets and lived experiences delivering 39 deliberations (at the time of printing) over a period of 10 years.

The book assembles decades’ worth of learnings, mistakes and lessons from the field and is peppered with the authors’ insider secrets.

Designed to help to advance the practice of deliberation around the globe, the book encourages decision makers to embrace this form of engagement and embed it into decision making and empowering others to plan, design and deliver impactful deliberative engagement processes of their own.

A word from the authors

Written for facilitators, changemakers, engagement professionals, project managers, decision makers – this book is for anyone looking to solve complex problems and increase trust between leaders and their communities.

Nicole Hunter said the biggest reason the trio wrote the book was to leave a legacy.

“This book is about making change happen with hard problems in a way that works. It’s about how to help people navigate change and complexity,” she said.

“We believe in helping people solve complex things in a collaborative fashion and this book is about a pathway to do that.

“It’s about change-makers, it’s for change-makers; there are tools in here that would be equally valuable around the family dinner table as they would be in a boardroom or out at a community meeting.

“These are tools that help people have the conversations that need to be had to make a difference in the world.”

“There’s a lot of uncertainty; people are anxious, they’re scared, not really sure what’s happening next, where we’re going or how we’re going to cope.

“We’re coming out of a pandemic and emerging into a stretched economic future. All that tells me that we’ve got to work closer together now while we’re all in this unchartered space together.

“I hope a publication like this is the first of its kind to amplify the role and voice of facilitators in this space.”

“In the big picture of all the issues society is facing and with the recent federal government election, it’s really clear people want to do democracy differently.

“There’s a whole lot of things we need to do differently, one of them is the way that people come together – particularly people with polarised views – to come to resolution.

“There have been so many big issues of our time that have not been resolved and this is a way of groups working together that will help solve those issues together. And the book is really a how-to manual to do that.”

An International assembly of deliberation leaders and devotees

More than 120 people from around the world gathered on Zoom to officially launch Facilitating Deliberation – A Practical Guide at the end of July.

Among the special guests were leaders in the deliberative democracy space, including the Hon. Jay Weatherill, former Premier of South Australia, and Art O’Leary, former Secretary of Ireland’s Convention on the Constitution.

“Citizens’ assemblies are a way to get hard jobs done,” Mr O’Leary said.

“They have transformed the way that Irish people live their lives. They have successfully contributed to the delivery of marriage equality and abortion, plus many other areas such as political reform and climate change.”

“I can safely say that deliberative democracy has not only assisted me in my career, it has probably made my career,” Mr Weatherill said.

Watch a recording of the book launch event. 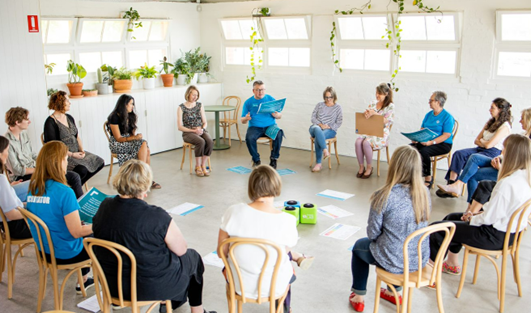 “At newDemocracy, we design Citizens’ Jury processes, and governments hire facilitation teams to deliver them.

“As an analogy: we write recipes, and facilitators are the chefs who bring them to life. And as you know, a great chef can make an omelette amazing, and a poor chef can turn Ottolenghi into a tragedy your pets won’t touch.

“We’re keen to see great facilitators all around the country so that governments always have people to turn to. …one of the country’s elite operators is MosaicLab, and they’ve created this book capturing how they work in the room.”

Oliver Escobar, Senior Lecturer, University of Edinburgh and Academic Lead on Democratic Innovation, Edinburgh Futures Institute, said: “Facilitating deliberation has received limited attention despite being a particularly challenging form of interaction. This publication addresses this gap and offers a generous contribution to advance this field and community of practice.”

John Gastil, Pennsylvania State University said: “The more readers this book finds, the better the chances that democracy will flourish in our century.”

Janette Hartz-Karp, Emeritus Professor, Curtin University and Co-Director, Empowering Participation, said: “This is like finding a timeless, treasured recipe book, based on firm principles and extensive experience, documented in everyday language, replete with pictures, stories and notes in margins.”

From the book launch: Participant insights, reflections and ideas (plus the event recording)

Find out more about the book.